Since January 2005 we had contact with Yury Kolomiets. He works for RusAdventure and is the author of the Cicerone guide about trekking in the Caucasus. With his assistance we created an itinerary.
We left for Moscow on 23 June, stayed there for 2 nights, and left for Mineralnye Vody on 25 June. This is what we call ‘Day 1’. From day 1 up to day 16 we had hired a guide, named Aleksey Solovyev. We found out he was de co-author of the Cicerone guide mentioned earlier.

Aleksey was there to pick us up. We were brought to Bezengi Camp with a van. After a stop in Nalchik and a very bumpy last hour we arrived in Bezengi Camp. The accommodation was nice, even a hot shower! We met Viktor, our porter. A very funny guy. Always smiling. 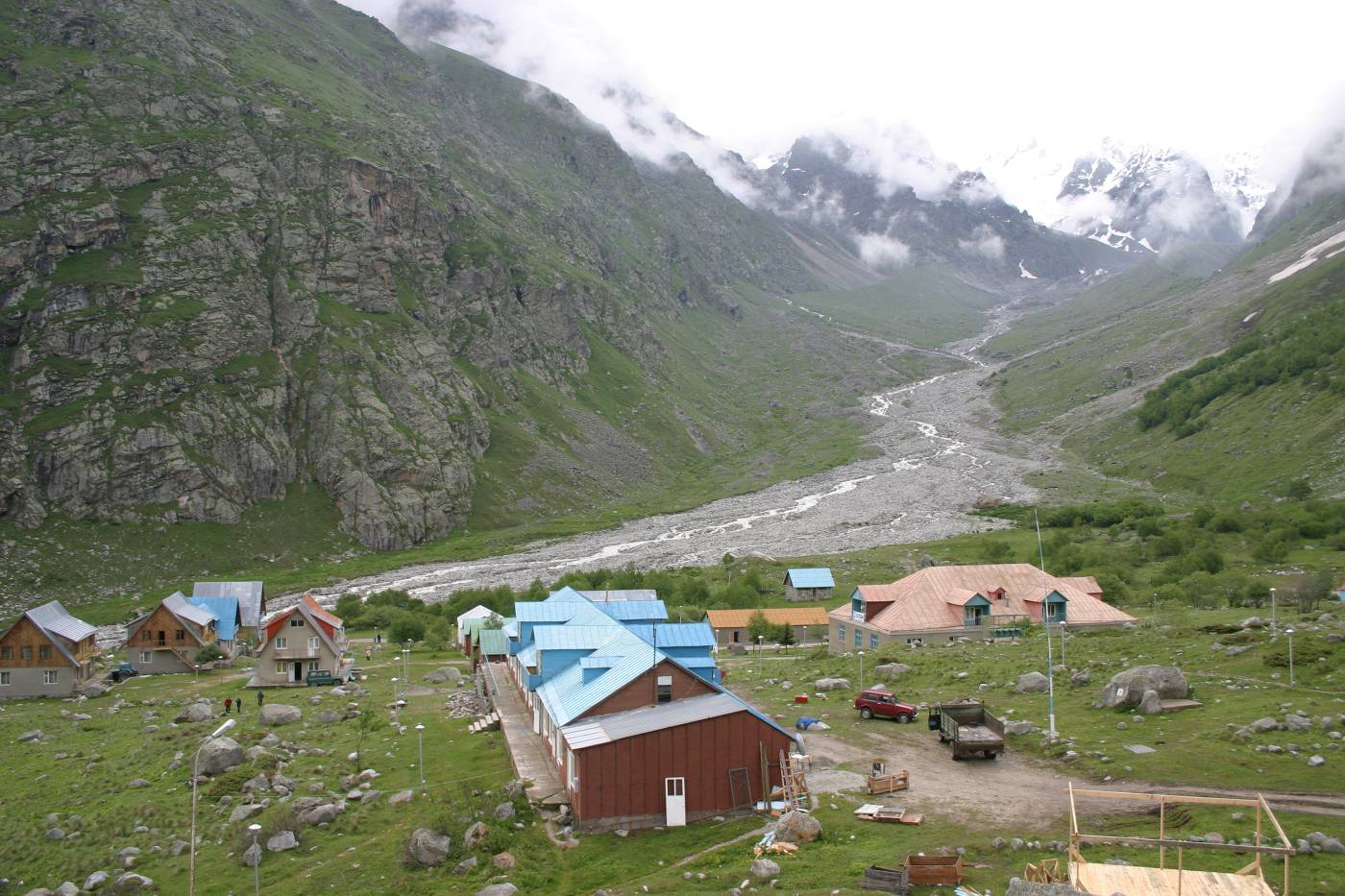 Via the glacier we walked to Barankosh. That night we were surprised by tens of animals (I do not know the name; big sheep like animals). It was very nice.
The campsite had fresh water from a nearby snowfield.

The ascent of Kelbashi was easy. First over a steepish path and then scrambling over some rocks. Then we had some snow and finally a scree slope to the ridge.
Because of the difficult terrain we could not go to the real summit.

This was quite a hard day. After a flat part on the glacier (with soft snow) we had to climb a steep part to the moraine. And then it was a long, long walk to the hut. However the view to the right was very impressive: Bezengi Wall.
All the way we walked on ice or snow.
We were very fortunate to have Dzhangikosh for ourselves. No other people, apart from the last day. 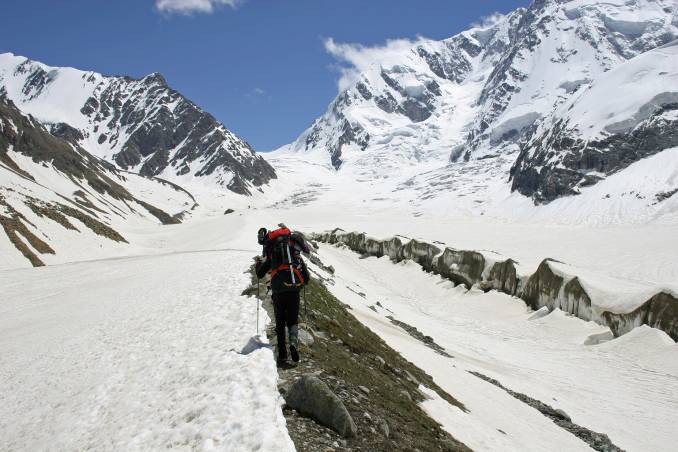 Early in the morning Viktor went back down to Bezengi Camp.
Originally this would be the day to climb Semenov. But Aleksey suggested to have an easy day today. We had already been hiking for 3 days and day 4 was quite strenuous. We agreed to have a light hike in the direction of Pik Freshfield. So we did. It was a fun day. No backpacks, only some light hiking and fun ‘skiing’ downwards on the snow slopes. Due to heavy winter snowfall there was still a lot of snow everywhere. Which was good. We rather go over snow than over blocky and rocky terrain.
Just next to the kosh there was snow melting in the afternoon sun. So we had fresh water in the afternoon.

Aleksey did not think that climbing Semenov was a very good idea. He said it was too difficult and would take too much time from Dzhangikosh. We would have needed to rope up and secure and belay. This would take a lot of time. So we opted for Freshfield.
We needed crampons, which we had to rent in Bezengi Camp. Those crampons fitted under our hiking boots. We also brought crampons from Holland, but they were the step-in type, which do not fit under regular boots.
We did not manage to climb to the summit. It was far too icy at the ridge.

After an early start we took our way to the south face of Sella. We had to rope up and use crampons. After 1 hour or so of walking, the terrain steepened. From then on we did not need rope anymore. We had to climb on a rather steep firn slope for several hundreds of meters. Later Aleksey told us it was 2A (Russian grade).
Aleksey went straight up, Marja and I took a zigzag approach. What I liked is that Aleksey did not ‘force’ us to follow his trail. I think he knew we were not beginners. He trusted us to follow our own approach. That was good.
After reaching the rocks we went up a few hundred meters but at around 4000-4100 we decided it was enough for today.
The way back was also quite awkward. Aleksey showed how to go backwards in steep snow. He made steps. 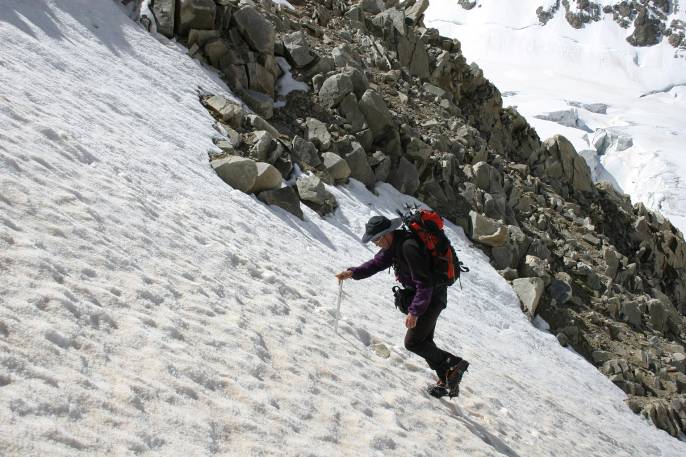 This was an easy day. The only ‘tricky’ part was at the end of the moraine, next to the icefall. There we had to climb steeply downwards. But it was not really a problem.
We safely returned to Bezengi Camp. We had time to wash some clothes and to relax. And we got our passports back. With registration.
For dinner we had a lot of real potatoes, and some meat.

After saying goodbye to Viktor we were transported to the Baksan Valley, in the same not-so-comfortable van. Since it was Sunday we could not register in Tyrnyauz. This would have to be done next day.
The Ozone hotel is great. A beautifully located hotel. An English-speaking lady at the reception. Very nice food! Vegetables, fruit! (And a beer……). Internet access. Big room, it was actually two rooms. With TV, minibar, big bed.
Aleksey advised us to get a duvet. We rented two at the Ozone Hotel. 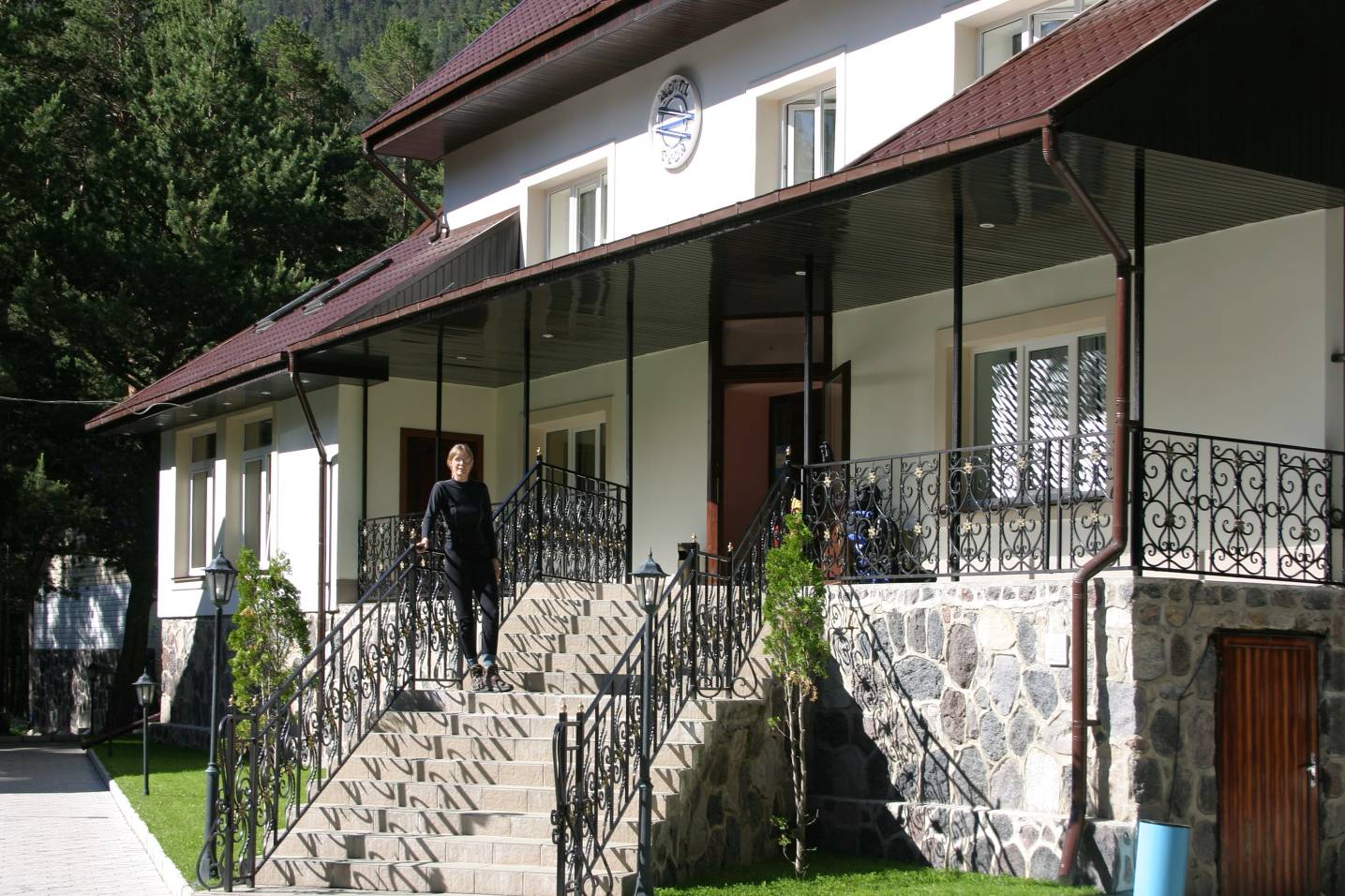 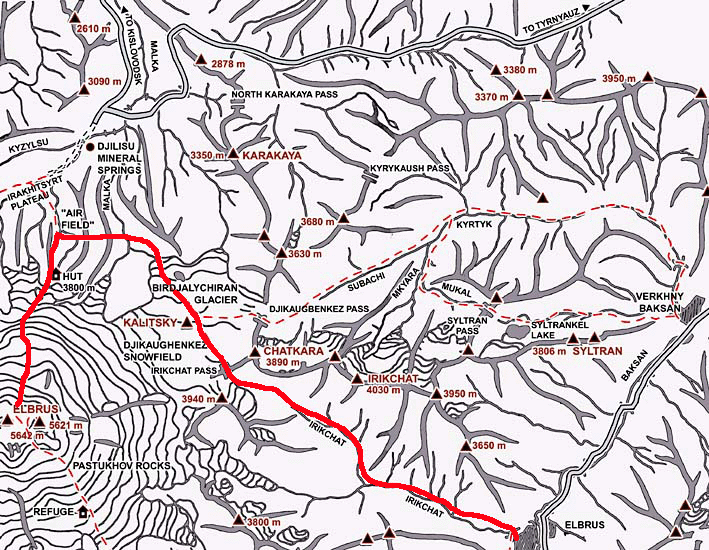 Aleksey suggested to leave our passports for OVIR registration. We could collect them when we got back in a week. I did not like the idea however to travel from Jilisu back to the Baksan Valley without my passport. So we agreed to wait until 10:00. By then the hotel people came back with the passports and registrations.
We met our 2 porters. Our personal porter was Vladimir, who spoke German. A very energetic character.
We camped just before the pass at the point were it starts to steepen to the pass. There was fresh water from the stream.

After crossing the pass we entered the huge Dzhikaukengioz snowfield. Due to the heat some ‘lakes’ had been created on the snowfield, which made it difficult to cross. Everybody in front of us already had wet feet. A lot of times Marja and I chose to take another way than the guides. Which was good, because we kept our feet dry. Eventually Aleksey decided to go off the snowfield, on the left side. From there we walked to the campsite. There was plenty of water.

Day 12, hike to the Airfield

This was also a very short day. Only a couple of hours up and down. We needed to cross some streams again. We did not camp on the airfield, but about 100 meters before and above it. There was water available.
In the afternoon the crew went to Jilisu to collect the gear for summit day. At 20:30 they returned and we got our supper.

This was the shortest day. The porters went up twice, the rest one time. The hut is beautifully situated at the bottom of the route up Elbrus. The guard had brought two black kittens that always tried to sleep in our sleeping bags. Also at night!
This day there was a Russian party on the mountain, but they failed to reach the summit by 50 meters, due to the strong wind. It was a warm night with that many people in the hut.

After the Russians left, we roped up. Due to the strong wind we returned at around 4300 meters, well below Lents Rocks. There would be no point in getting tired. 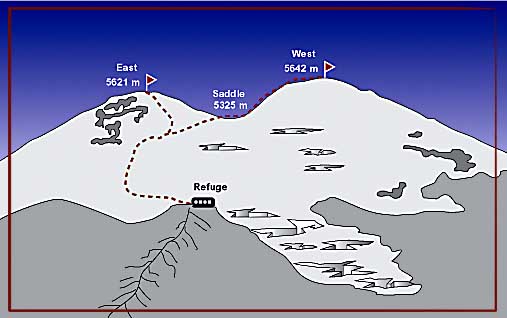 We got up at 02:00 in the morning. We got breakfast. Aleksey prepared two extra thermos bottles for us, since we did not have any. We only had those Platypus water bags.
At 03:30 we were roped up and had crampons under our plastic boots. We took walking sticks, no ice axe. We needed head torches for about 1½  hours.
At first it was not very cold. Marja and I only wore a Polartec 100 shirt, Windstopper jacket, Polartec 100 trousers and Gore-Tex over trousers. Gore-Tex jacket and duvet were in the backpack. After 2 hours we needed the Gore-Tex jacket as well. We never used the duvet.
It turned out to be a beautiful day. It was clear all day until the moment we returned to the hut in late afternoon. There was not too much wind. Ideal conditions.
It took us 3½ hours to get to 4500 meters. That is the lower part of Lents Rocks and the end of the crevasses area. We left the rope and a thermos bottle there.
We needed another 3½ hours to reach the slope to the summit at 5200 meters. From 5000 m Aleksey suggested to take 50-70 steps at a time and then rest for 30-60 seconds. I think this was a very good approach.
The last 400 meters was very tough for Otto. His speed decreased, he had problems controlling his breath. He was completely out of energy. Halfway we rested and he took a Mars bar. The hour after the break his energy seemed to have returned somewhat. By then we knew for sure that we would summit. The only question was: what time?
At 13:30 we reached the crater and 15 minutes later we were on the summit. There it was very windy and cold. We only stayed there for 5-10 minutes. Aleksey took some photographs of us and then we quickly returned.
The way down was even more hellish than the way up. Otto was so tired he could hardly walk anymore. The snow slope was of unequal quality. Sometimes you stepped on the hard snow, and sometimes the snow was so soft that your legs vanished in it up to your knees. It was very very tiring. Otto needed to go very slowly and to concentrate very hard.
After informing Aleksey of our ‘progress’ we descended very slowly to 4500 m where the rope and hot tea was. We took another way down than we did up. This time we went around the rocks. The tea was an energy boost for Otto. We roped up and went slowly, but less slow than before, to the hut. The complete descent took 3½ hours.
You would expect that we were very hungry. But no. We just had some soup and that was it. 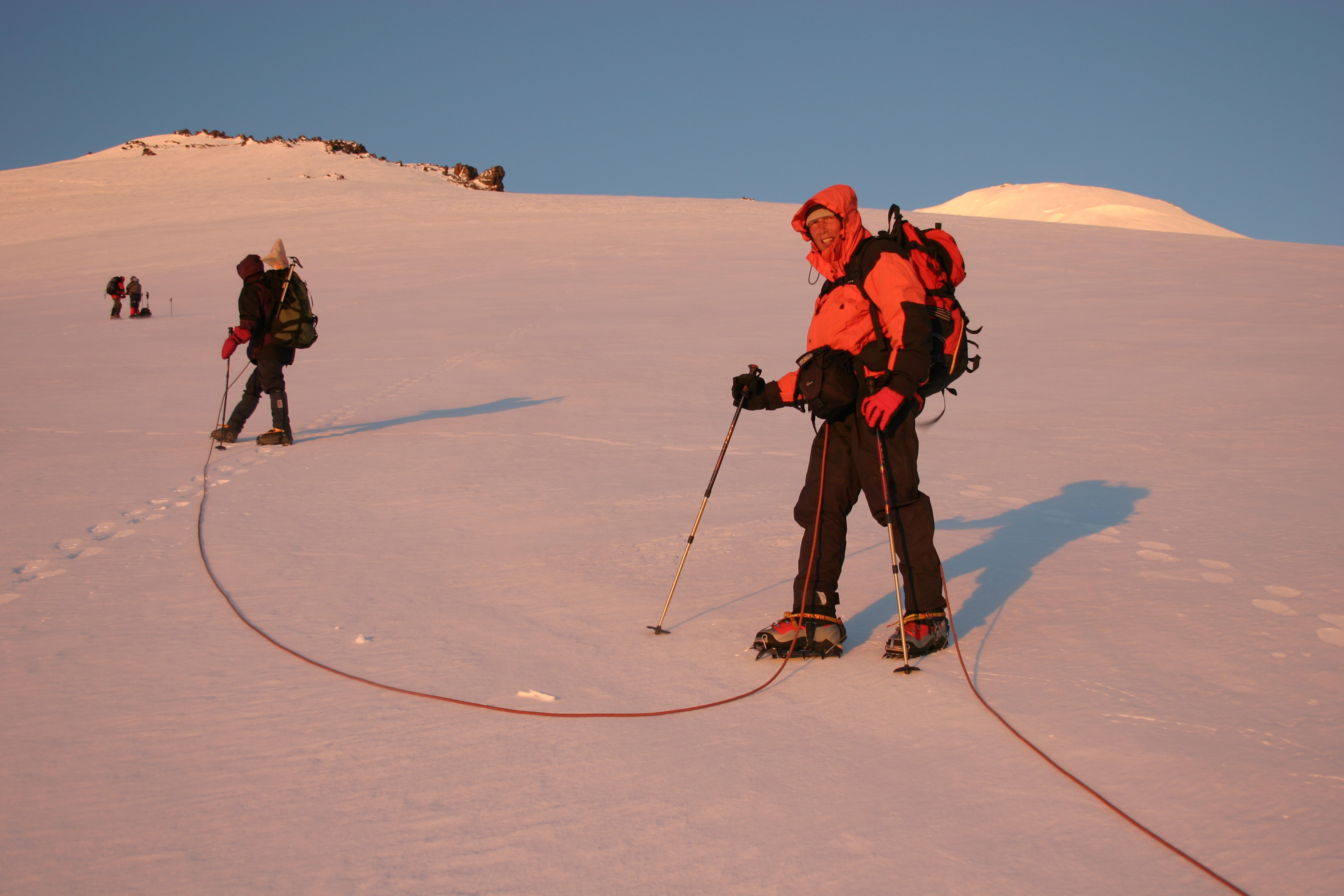 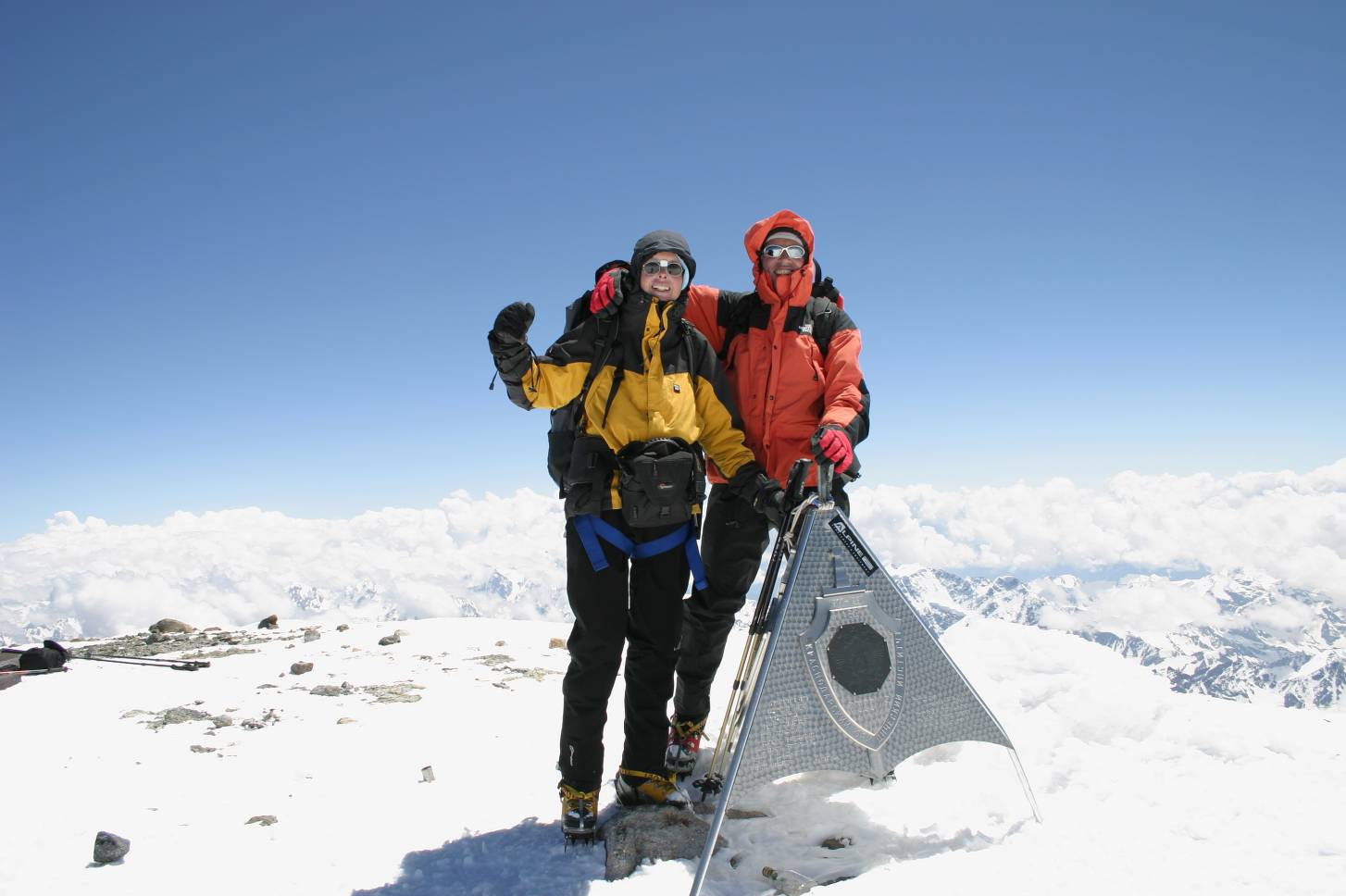 Day 16, back to Ozone Hotel

Originally this was our reserve day. Since we did not need it we decided to go down to the Baksan Valley. In the programme of RusAdventure this day would consist of going down to the Airfield and camp over there. But this is only 1 hour below the hut. We found it more comfortable to go back to the Baksan Valley.
After a photo shoot in front of Elbrus we descended with all our gear. In Jilisu we took a bath. We had quite a lousy van with lousy seats. I sat on my backpack. However, the driver was fast. It took us 3½ hours to get to the Ozone Hotel in Elbrus. We took the same room and paid for it. After a nice shower, we got our dinner with Aleksey. And after 2 games of billiard with Aleksey we went to bed. 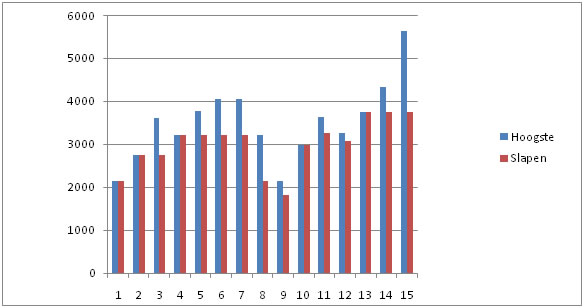